Buongiorno Roma! What the beautiful GT means for Ferrari's future

The new Ferrari Roma was seen in the flesh during its unveiling in Rome yesterday, and I can confirm that it is not only one of the most beautiful Ferraris in recent memory, but one of the handsomest of any contemporary sport or luxury car. Its details are predictably rich, well rendered, and pointedly, alluring and accessible. But it is not just the details in a car from the famed Italian sports car manufacturer, and one that is expected to start at around $250,000.

"If you now go in the market, and you ask someone who can afford (a Ferrari) — because this is not a cheap product —why don't you buy a Ferrari? They are tempted, but most of them are a bit afraid. 'I don't know if I can drive it, it's very aggressive,'" said Enrico Galliera, the brand's chief marketing officer, in an interview with Autoblog. "And that's one of the major answers. It's not, 'It's too expensive,' or 'I don't want to have fun driving.'"

There's a kind of fear of the brand's reputation for aggression and showiness. The Roma is intended to soothe these concerns, and entice new clients into the Ferrari stable. This is accomplished by making everything at once more sophisticated, more mature, and more enticing. 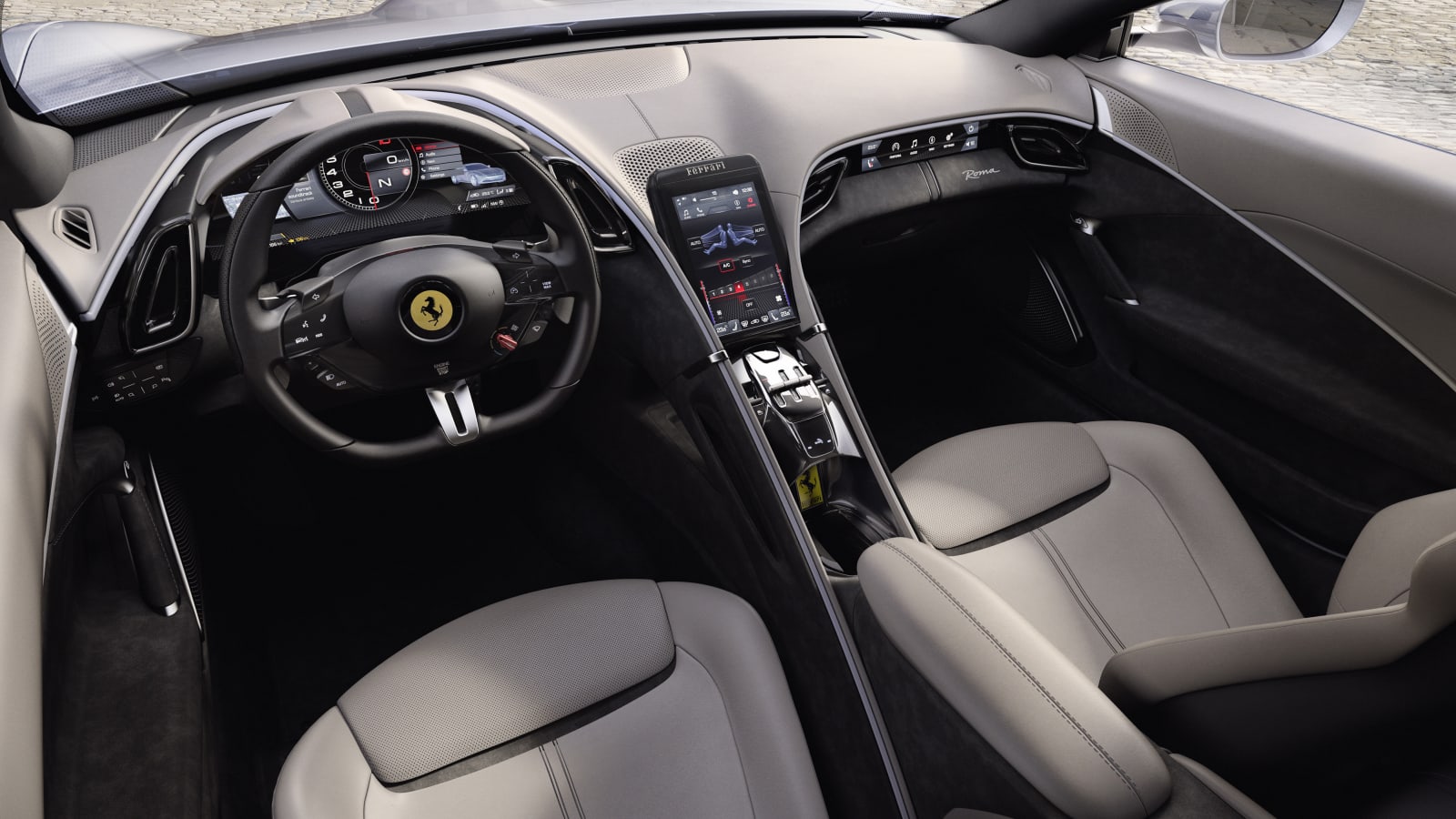 On the inside, one is especially drawn to the big, curved and crystalline LCD instrument panel and large center screen, the cozy and coddling leather seats, and the new aviation-inspired metal toggles that act as the transmission selector. Less impressive are the capacitive haptic "buttons" on the steering wheel, but judgment will be reserved on those until we have a chance to experience them while driving, instead of just while sitting on a stage making embarrassing vroom-vroooooommmmmm noises.

But it is the outside that really has me drooling. This is not just because the Roma has classical rear-drive GT proportions, with a fiendishly long hood, a selfish not-quite-four-place cabin that the brand describes simply as a "2+," and a truncated Kamm-back tail. It is because the design is so improbably clean, devoid of the strakes, scoops, spoilers, or even ancillary lines that corrupt so many modern cars. Especially evocative is the treatment of the front and rear, both of which are impossibly low, without ever feeling threateningly so. It all feels of a piece, and there's not a bad angle.

"We want to transmit this idea of harmony, and a beautiful dynamic in balance," said Ferrari head of design Flavio Manzioni. "The front is prominent, is wrap-around, giving a lot of tension to the car. The cabin is very compact, sitting on the rear wheel. This was one of the characteristics of these beautiful Ferrari GTs in the '50s and the '60s, when we were really dictating the principals of beauty all over the world, and showing how is the Italian taste, in terms of not only cars but in general, in terms of aesthetics."

More than a bit of 275GTB and Daytona can be seen in the overall profile, but, as usual. Ferrari denies any retro cues or heritage inspiration in any of its designs.

"As you can see, there are no specific elements that are quoting the elements of the Ferrari GTs of the past. There are some reminiscences, maybe, but the formal language is absolutely modern," Manzioni said. "You have to know that every Ferrari starts from the package. From the technical contents. The proportions are dictated by the technical requirements. So, as I said, the position of the engine. The engine is a mid-front engine, very important. The radiators are in the front. The position of the cabin is determined by the H-points and so on and so on."

All of this baked-in elegance and refinement is intended to further distinguish the categories of vehicles that Ferrari plans to advance in its future offerings.

"The direction where the company wants to go, it's really simple to answer," Galliera said. "If you divide our product range in two segments, which are the pure sports car, and what we call grand turismo sports car.

"On the pure sports car, our strategy is to further work on the performance. We want to be the one in the market with the highest performance and the highest technology. So, we push in the direction as much as we can with cars like the F8 Tributo and SF90 Stradale. When we look at the grand turismo segment, performance remains important, but we grow the importance of versatility and comfort. So all of our cars in the grand turismo will move in that direction, keeping the performance but not at any cost, and so working on the versatility and the comfort of the car."

What does this mean about the forthcoming Purosangue, the brand's first SUV?

"What are you talking about? What is the Purosangue?" Galliera laughs. "The Purosangue is a grand turismo one. So, it's pushing the boundaries toward comfort, versatility, and elegance."