By the time automakers spot a trend in the aftermarket, they've already lost millions to tuners and custom shops. Rolls-Royce, once befuddled why Ghost owners were spending tens of thousands on blacked-out body kits, now moves fast to appease the more capricious tastes of its youngest buyers. Hence the Cullinan Black Badge, here after barely a year since this half-million-dollar SUV went on sale.

The average net worth of a Rolls owner is $20 million, which means an older demographic—but the Black Badge cars, along with cheaper and sportier rides like the Wraith, have attracted more industry captains in their thirties and forties than ever. In terms of marketing magic, the Cullinan Black Badge is no different than a Nissan Rogue Midnight Edition or any number of ordinary factory offerings that darken the trim and wheels for an upcharge.

Rolls-Royce tints the chrome surrounding the grille, air intakes, windows, and exhaust tips. The Spirit of Ecstasy dims her bright shade, and the RR badges are inverted to silver letting over a black background. Unique 22-inch wheels aren't the standout. It's the red brake calipers—a first for Rolls-Royce.

There are real performance upgrades to the three-ton Cullinan, including new brake rotors and revised pedal feel that Rolls-Royce claims is less squishy. Tweaks to the air suspension and steering at both axles may or may not improve the Cullinan's berth in tight city streets, but be assured the "Magic Carpet Ride" is undisturbed. A software remap puffs an additional 29 horsepower and 37 lb-ft of torque into the 6.7-liter V-12 (for a total of 592 horsepower and 664 lb-ft). But this last part is daft in a Rolls: Pressing the "low" switch on the gear selector reworks the eight-speed automatic transmission into Sport mode and allows a few mild crackles and soft spitting sounds from the exhaust.

Inside, the carbon-fiber trim has six clearcoats, and the Starlight headliner now animates eight shooting stars from 1344 fiber-optic lights. The Forge Yellow leather shown in these photos is brand new, too, as is the infinity symbol embroidered into each seatback.

While the Dawn has been the best-selling Rolls, the company predicts the Cullinan will soon shove it aside. Rolls has delivered fewer than 1000 SUVs in the U.S. this year, which is a massive number considering an average selling price of $409,000. The Cullinan Black Badge doesn't yet have a list price, but compared to what some customers spend at Mansory or West Coast Customs, it'll probably look like a deal. 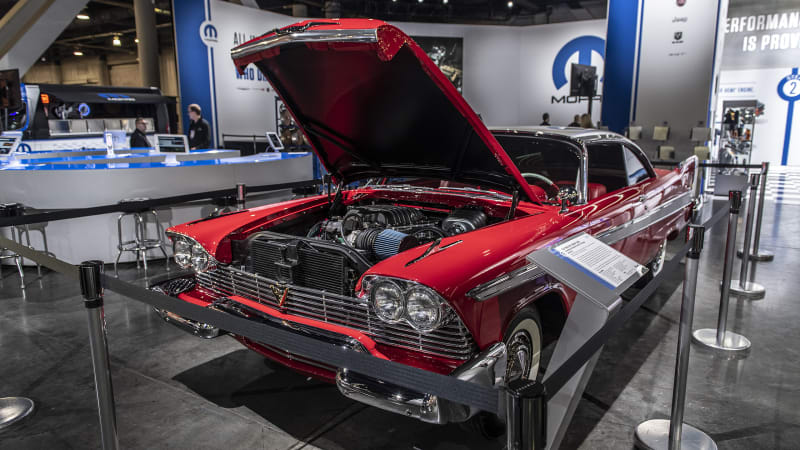 We’ve seen Plymouth Fury “Christine” re-creations before, but probably not quite like this one. It’s a 1,000-horsepower version of the red-painted 1958 Fury of film infamy, thanks to the addition of a Hellephant crate engine.

The SEMA build comes courtesy of the folks at "Graveyard Carz," the reality show about Mopar muscle-car restorations, who swapped out the original 305-hp V8 Golden Commando factory engine and installed a 426 cubic-inch supercharged Hemi crate motor, which also puts out 950 pound-feet of torque. This presumably ups the evil quotient in the car, which takes its name from the 1983 horror film of the same name by director John Carpenter, an adaption of Stephen King’s 1983 novel about a car imbued with a malevolent, murderous spirit — a sort of proto-autonomous vehicle gone horrifically wrong.

Along with the Hellephant is a variety of other non-original components, including MagnaFlow "turbo mufflers" and performance alloy axles. "Graveyard Carz" also notes the version used in the film already veered from the factory version, since Carpenter opted to use a more sinister-looking two-door hardtop version — King’s Fury was a four-door. The former was never available in red, only in a beige with gold trim, a combination that would hardly strike fear the hearts of movie-goers. The rest looks pretty gorgeous, with those signature tail fins and dazzling anodized aluminum stripes down the sides, quad headlamps and wide, chrome grille.

According to Hagerty, the film cycled through more than 20 cars, not all of them Furys and some of them only for their parts, and it understandably did a number on them: Only a few cars emerged unscathed when filming wrapped up. Those that did hit the road afterward to promote the film.

Just 5,300 versions of the 1958 Fury were ever built with the Golden Commando engine, and only 41 are believed to still exist.

When a 1000-hp custom-built muscle car is stolen, you don't really expect ever to see it again. This modified Dodge Challenger's theft tale has a different ending, though. This car was stolen and involved in a hit-and-run incident with the Nevada Highway Patrol, but it still made it to its display at SEMA.

The Challenger, built for SEMA by Quintin Brothers Auto and Performance in Vermont, was stolen prior to the show from an overflow parking lot at a casino close to the display hall, according to local media reports. After police tracked it to a parking garage hours later, the cornered driver rammed it into a police car and fled the scene.

According to the Quintin Brothers' Facebook page, the driver then crashed through a fence and onto a nearby karting track during an event. Eventually, the car was abandoned and recovered without the driver. He managed to escape the scene, only to be apprehended on November 5 after allegedly shooting someone outside of a local grocery store, according to the Las Vegas Review-Journal. The victim was hospitalized with non-life-threatening injuries.

With all of that having happened in the last week, it'd be understandable for the Quintin Brothers to cancel their SEMA display. But after all the coverage the story has received, the shop brought the damaged car to the ProCharger booth at SEMA anyway.

The story is now a central part of the display, which features a link to a full write-up and even welcomed Nevada State Trooper Adam Whitmarsh to the show. He's the officer whose patrol car was hit by the Challenger days ago. The car is still in disrepair, wrapped in police tape, and filled with garbage discarded by the thief.