Cruise Origin is GM's autonomous shared car of the future 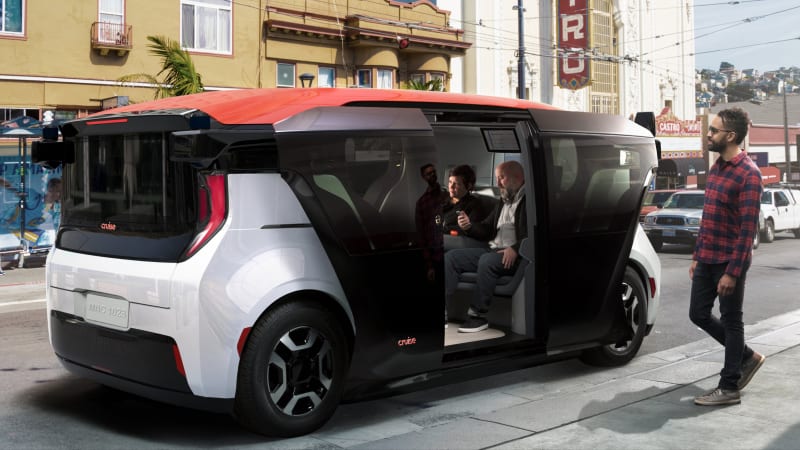 Here it is, the fully fleshed-out autonomous car from Cruise Automation, GM's autonomous vehicle subsidiary. It's called the Cruise Origin, and it looks pretty much like all those other autonomous pod concepts we've seen over the past few years.

Styling wise, it's a box with slightly curvy ends. Both ends look pretty much identical, except one has red lights and the other has white lights. In the middle are split sliding doors like those on a subway train. On top you can see some of the sensors it uses to navigate.

Inside, the Origin adopts a similar layout to other autonomous concepts with the front and rear seats facing each other, with a large empty space in-between. Behind the seats is cargo space. While Cruise doesn't provide any details about the interior, the photos show that the seats, floors and more are hard, durable plastics and vinyls that are presumably easy to clean.

By removing the steering wheel, the rearview mirror, the pedals, and more, we’re left with something simple: space. pic.twitter.com/K3tS0QxuSC

Cruise is also mum on many other details. It notes that it's electric and is built on a platform from GM, and it uses a modular system for its sensor hardware that can be upgraded independent of the car itself. It also says each vehicle should be able to be used for up to one million miles. As for battery capacity, motor arrangement and output, Cruise shares nothing. Well, it will share the car. Cruise Origins will be summoned via an app just like with a ride-sharing service, though Cruise touts the fact that you'll get a consistently clean and safe vehicle every time and at all hours of the day. Cruise also says that when the Origin goes online in San Francisco, a user could save as much as $5,000 a year compared with owning a car or using a ride-sharing service. Cruise does not say when the vehicle will be available to the public, though, nor how much rides will cost. So while the Origin answers some questions about the future of Cruise, it also raises many more.