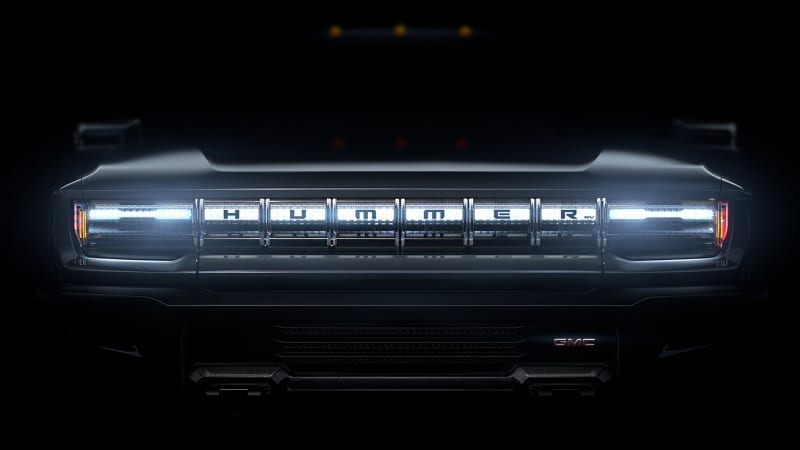 General Motors confirmed it's bringing the Hummer nameplate back on an electric, GMC-badged pickup by publishing a dark photo of its front end. The battery-powered drivetrain under the sheetmetal represents a tectonic shift, but we noticed another flagrant break with tradition: it wears six slot-like inserts instead of seven like on every previous Hummer and countless Jeeps. Adding an extra slot wouldn't have landed GMC in hot water.

The seven-slot grille has historically been associated with Jeep, and the company proved it's willing to go to significant lengths to ensure another automaker — especially one it perceives as a rival — doesn't use it. Parent company Fiat-Chrysler Automobiles (FCA) bitterly sued Mahindra over the Roxor's design, including its five-slot grille, and won in 2019, forcing the Indian firm to unveil a redesigned side-by-side for the 2020 model year.

And yet, stylists would have very likely been able to get away with it on the Hummer. While General Motors owns Hummer, the brand traces its ancestry to 1970, when American Motors Corporation (AMC) purchased Jeep from Kaiser and changed the name of its General Products Division to AM General Corp. The division manufactured the rear-wheel drive, CJ-based DJ for the United States Postal Service and began developing the Humvee in 1979.

Jeep and AM General went their separate ways when Renault began investing in AMC. Foreign companies weren't allowed to own defense contractors, and AMC had more to gain by gradually selling out to Renault than by keeping AM General, so it divested the division to LTV Corporation in 1983. Humvee production started shortly after, but no one protested its seven-slot grille because there was no risk of it stealing sales from a comparable Jeep model. It was manufactured exclusively for the U.S. Army, and civilian sales weren't planned.

The original civilian Hummer released in 1992 must have raised more than a few eyebrows but, here again, it didn't directly compete with one of Jeep's off-roaders, so no one complained. It was huge, correspondingly expensive, and its portal axles made the YJ-generation Wrangler wet its pants. It's the H2 concept (pictured above) unveiled at the 2000 Detroit Auto Show that set off alarm bells in Auburn Hills. DaimlerChrysler's lawyers counted the slots in the chrome-plated insert that dominated its front end and shuddered when they reached seven.

They prepared for war without realizing the lawyers representing Hummer were also gearing up for a legal battle. In March 2001, DaimlerChrysler and General Motors sued each other 11 minutes apart in two separate courts over the H2's grille design. The salvo of accusations quickly spread outside of the courtrooms.

"We believe General Motors is targeting Jeep vehicle customers who are interested in rugged, go-anywhere, do-anything vehicles," DaimlerChrysler spokesman Jay Cooney told Utah's Deseret News in 2001. "Any 10-year-old can tell the difference with or without the grilles. It's sort of like saying Arnold Schwarzenegger looks just like Mr. Rogers because both of them have nice smiles," replied General Motors spokesman Brian Akre.

The production version of the H2 concept reached American showrooms in the midst of the legal battle and it sold reasonably well during its first few months on the market. It was much bigger and far more expensive than the Grand Cherokee, so Hummer didn't have a slice of Jeep's hard-earned market share in its crosshairs, but rumors of a smaller model named H3 were already making headlines; the stakes were higher than before.

In November 2002, the 7th United States District Court of Appeals ruled in Hummer's favor, and cited its common heritage with Jeep as one of the facts that helped it make this decision. It also argued Jeep waited too long to take the grille to court; it should have sued when the Humvee and the original Hummer (which had become the H1 by that point) respectively entered production. General Motors expanded the Hummer range as planned.

The smaller H3 went on sale for the 2006 model year with a seven-slot grille, and the production version of the HX concept (shown above) that should have tussled with the Wrangler in Moab starting in about 2010 would have undoubtedly worn the same styling cue. There was nothing Jeep could have done about it because General Motors fought hard for the right to build trucks with seven slots between the headlights. So, why will the GMC Hummer arrive in late 2021 with what looks like six slots? We can think of several plausible answers.

The born-again Hummer doesn't have actual grille slots. Its front end wears vertical trim that chops up a thin, horizontal light bar in six pieces. The Hummer name has six letters in it, so it's easy to speculate that's why stylists split the bar into six chunks. Though seven pieces of chrome-like trim separate the letters, which creates a discreet visual link between the new Hummer and its predecessors.

Or maybe General Motors took a less belligerent approach to drawing the Hummer's front end. It's already opening an old wound by rekindling a merciless rivalry, even if Hummer will remain dead as a brand, so there's little sense in driving the point home by pouring seven grains of salt in it.