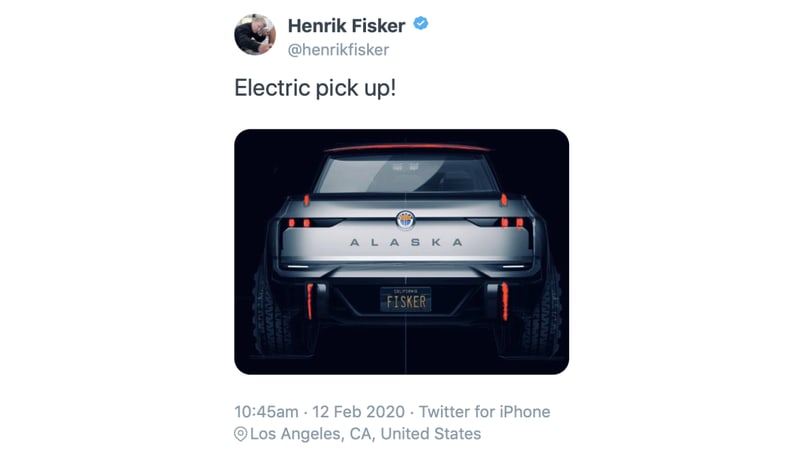 Last August, Henrik Fisker teased what looked like the rear view of a Fisker pickup truck. The caption accompanying the image of a rendered tailgate and conventional cabin glasshouse read, "After our Fisker electric SUV, we have already decided on our next 2 EV’s on the same platform!" That platform would be the same the Ocean crossover is built on. Much has happened since then, namely a gaggle of OEMs and startups debuting, announcing, or making noises about rolling out an electric pickup in the next two years or so. Perhaps Fisker got caught up in the swell, because he tweeted a new image of a pickup with the name "Alaska" emblazoned across the back, and the caption, "Electric pickup truck!" Then he deleted the tweet.

When asked about the brief preview, his company told both Roadshow and Car and Driver, "We can't confirm the model or name of a vehicle that may have been seen in the tweet," but that, "We can, however, confirm that Fisker Inc. is indeed working on a modular electric vehicle platform that may underpin several different affordable EV models in the future."

What we know is that Fisker's pickup design has come a long way since August, no matter how fanciful the image in the unintentional reveal. Last August's design looked like someone spent a few minutes turning a Ford F-150 backside into a passably believable Fisker product. The newest image looks like a Fisker; weighty forms with deep vertical and horizontal sculpting, decorated with Fisker's jewelry and fonts. The only off note is the tires, which are cartoonishly rugged. We're fans of the name, though, even if there's a product called Alaska in every industry from fertilizers to electric fans, and Renault sells a pickup called the Alaskan.

As of writing, Fisker hasn't filed to trademark Alaska. For now, we'll pretend the tweet was a hallucination and wait for the next time Fisker teases a vehicle we know is coming.