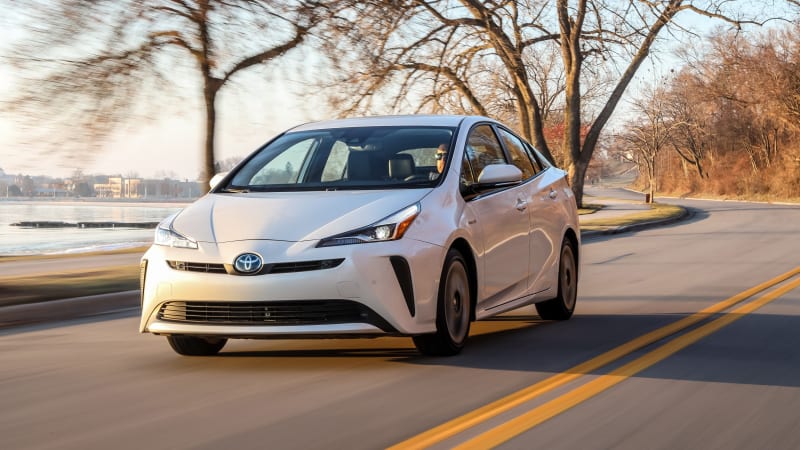 Toyota has an interesting problem on its hands: The Prius, once the ubiquitous and obvious answer for those seeking fuel savings or environmental cred, is losing ground. And it’s not losing ground to other specialist green vehicles in the company’s lineup; it’s losing sales to hybrid versions of otherwise normal vehicles like the Camry, the Corolla, and the RAV4 on the company’s sales sheet.

With Toyota's sales figures in for December, we can look at the entire year-to-date trend. And the Prius (all versions) is down a substantial 20.4% year-to-date, and -4.6% month-over-month. That’s more than just a downturn in cars compared to crossovers and SUVs; the entire car lineup at Toyota is only down 4% overall YTD. What’s telling is looking more closely at the company’s other hybrid sales trends, which thankfully the company breaks out.

A quick aside: The Corolla Hybrid is too new to draw any conclusions about, and it’s our best guess that as the months roll on it’ll really start to eat further into Prius sales, considering its admirable specs and reasonable price. Toyota managed to move more than 16,000 of them in 2019 despite a late start. For comparison, in the same time period, Honda sold just a hair more than 26,000 examples of its dedicated hybrid, the Insight. We’ll be interested to track data in the coming months to see if Toyota's compact continues to widen its footprint (especially since unlike the Prius and Insight, it's only available in a single, lightly equipped trim level).

But we can presume the impact of the company’s other products. The RAV4 Hybrid is the most important, since historically its predecessor already killed off a Prius variant, the larger Prius V, despite being more expensive and offering significantly lower fuel economy. We think that started a trend: Consumers became less concerned with signaling their green cred via a unique model, like the unmistakably efficient Prius, and more interested in a conventional vehicle shape. In other words, the uniqueness of the Prius became a sales liability rather than an asset.

The significant improvement in the new RAV4’s fuel economy (and performance, and overall desirability) have apparently paid dividends. The RAV4 Hybrid is up 92.3%, moving a full 10,127 units in December ’19. That’s a good showing for a hybrid vehicle in general, besting for example the entire month’s sales of the conventional Volkswagen Tiguan (7,931). It also offers 41 mpg city and 37 highway in an otherwise normal-looking crossover, with a reasonable starting MSRP of $29,217. It’s the killer app – and it’s getting more people to drive Toyota hybrids, with 92,525 moved last year, to be specific.

The Camry Hybrid is a smaller factor, but it should be noted that it offers the same fuel economy as a basic Prius while being overall a significantly better car, with conventional looks. Its share of the pie is smaller, at 26,043 sales YTD, but there’s an increase of 13.7% YTD.

So too it goes with the Highlander Hybrid, moving 18,248 units in 2019, a 25.7% increase YTD. Being much larger than the Prius, it might not be eating into its sales directly, but it does help show an increased interest in hybrid variants of conventional vehicles. It doesn’t hurt that the Highlander Hybrid is a unique beast on the market, either, with no direct competitors.

What other factors are at play? Toyota's always tried to set the Prius apart, stylistically, but the fourth-generation Prius landed with a dull, wet thud of apathy. When we ran early spy photos, our commenters were revolted – and we only partially warmed up to it in person. From certain angles. Toyota, chastened, quickly redesigned it, using the introduction of the AWD-e variant as an excuse. While the weirdness is mitigated to some degree, who could call the 2019 Prius truly attractive? As we've just argued, if the unique bodystyle is less of a factor for buyers who overwhelmingly desire crossovers, certainly the overtly strange sheetmetal doesn't help any. The RAV4 Hybrid isn't just a crossover, it's a relatively handsome one. That's a hard uphill battle, against market forces and inertia, for the Prius to win.

It might be the subject for more prognostication later, but as we discussed Prius sales in the office, many of us wondered if it is the beginning of the end for the hybrid and PHEV Prius. Toyota has hinted that "Prius" isn't necessarily synonymous with "hybrid" as far as the company's concerned, and that has many of us wondering if it's time for the Prius to be the company's green tech vanguard again. Do you know Toyota hasn't built an EV since the extremely limited production Scion iQ EV and Tesla-powered RAV4 EV circa 2012? EVs are proliferating, even if sales are limited. If Toyota could re-envision the Prius as a compelling mass-market electric vehicle, doing for EVs what the original Prius did for parallel hybrid adoption, it could make the Prius relevant again for American consumers.

As for now, we'll wait and see how 2020 treats the Prius and its hotter-selling hybrid stablemates.