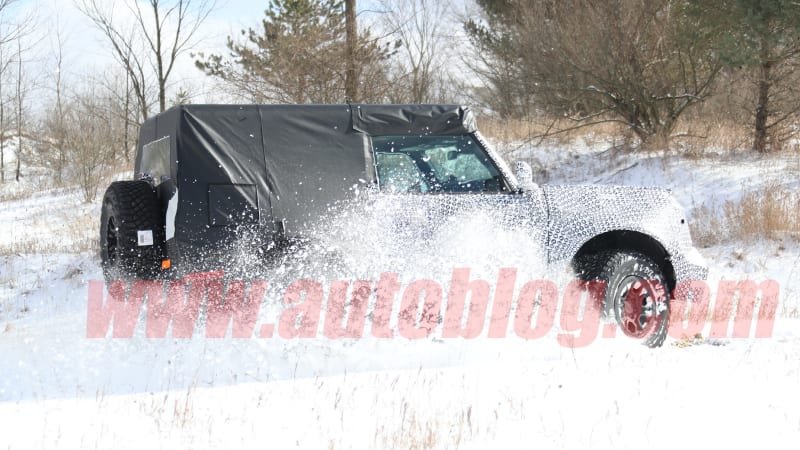 It's happening! The two-door variant of Ford's new Bronco 4x4 has been spotted in the wild, this time wearing what appears to be the earliest version of its production-intent body work. We previously speculated that it could be some time before a two-door mule with a production body made its way into the wild; we're happy to report that we were mistaken.

We've seen the four-door variant testing a few times so far in 2020, but this is the first time we've seen a two-door that wasn't just a cobbled-together collection of Ford Ranger pickup parts.

This mule is clearly being used as intended, which has the unfortunate downside of making it trickier to spot any noteworthy details that we haven't already identified from closer looks at the four-door.

From previous photos, we already know that the new Ford Bronco will ride on a solid rear axle with coil springs and struts (which makes sense, because leaf springs would conflict with the departure angle needs of a short-wheelbase 4x4). A Panhard rod serves as the rear lateral link.

It will have an independent front suspension (which appears to sport aluminum lower control arms) and, at least in its more basic trims, a fixed sway bar. If Ford comes out with a variant intended to compete directly with the Jeep Wrangler Rubicon, we'd expect it will have an electronic sway bar disconnect.